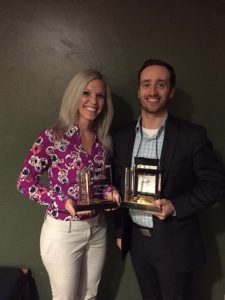 Lane & Waterman attorneys Andrea Mason and Josh McIntyre each received the Iowa Defense Counsel Association (IDCA) Rising Star Award at the IDCA Annual Meeting in Johnston, Iowa on Thursday. The Rising Star Award is given to IDCA members who have exhibited extraordinary commitment and leadership in the organization and have been members for less than five years.

Josh presented the caselaw update on employment law and civil procedure in 2014. Josh also authored Complying With the (Not So) New Duty of Competency in Technology in the Spring 2016 Defense Update and Miranda v. Said – A Small Window for Emotional Distress Damages in Legal Malpractice Actions in the Spring 2014 Defense Update. Josh serves on the IDCA Deposition Bootcamp committee, the New Lawyers Committee, and the Employment Law and Professional Liability Committee. Also at the meeting, Josh joined the IDCA Board of Directors in one of two New Lawyer positions, joining Lane & Waterman attorney and IDCA board member Diane Reinsch.