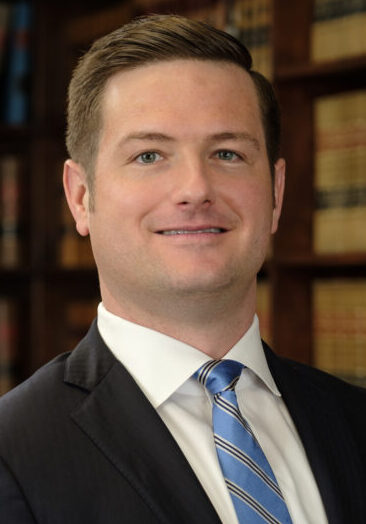 Following in his grandfather’s footsteps does not just apply to his legal practice at Lane & Waterman; David Waterman can walk the same path Robert V.P. Waterman took to the Quad City Symphony Orchestra (QCSO) as a Trustee in the 1960s and 1970s. Just a few blocks away from the firm’s law offices, “Bob Sr.” devoted many hours to the QCSO Board of Trustees, serving as president of that board from 1965 to 1967. David also follows his grandmother, Kitty Waterman, who served on the QCSO Board of Trustees. Today, David, a fifth generation attorney in his family to practice at L&W, and Bob and Kitty’s oldest grandson, begins his service as the newest (and a second generation) Board of Trustees member.

David’s history with music-making starts with his paternal grandparents, but it doesn’t end there. Growing up, he was Curly in Oklahoma! at Sudlow Intermediate School, played the string bass in orchestra at Davenport Central High School, and sang in the choir. David fondly recalls attending many symphony performances with his grandparents and parents over the years, too. “The Quad City Symphony Orchestra was a big part of my family’s life growing up. I remember attending the pops concerts on the banks of the Mississippi River, listening to Tchaikovsky’s 1812 Overture, and watching the magnificent fireworks displays. I am passionate about ensuring that this community continues to benefit from music education and the symphony’s timeless performances as well as new works. I am most excited about the opportunity to serve on the Symphony Board and grow its audience.”

Brian Baxter, the Symphony’s Executive Director, welcomed David to the Board of Trustees: “While I did not have the pleasure of working with Mr. or Mrs. Waterman, the legacy of their leadership is remembered. For example, Bob was integral in shepherding our expansion of education programming. I look forward to getting to know David and the energy he will undoubtedly bring to the Symphony Board.”

The QCSO Board of Trustees seeks to advance the organization’s mission to inspire, entertain, and engage the Quad City community through superb music, music education, and cultural leadership.